Under default conditions, extruder axis movement is treated in the same way as the XYZ linear axes. The extruder motor moves in linear proportion to all the other motors, maintaining exactly the same acceleration profile and start/stop points. But an extruder is not a linear system, so this approach leads, most obviously, to extra material being extruded at the end of each linear movement.

Take the common test-cube as an example. Even with the best tuning the corners are usually not sharp, but bleed out. The top solid infill displays roughness where the print direction changes on perimeters. These problems are minor or even imperceptible at low printing speeds, but they become more noticeable and problematic as print speeds increase.

Tuning the flow can help, but this may lead to under-extrusion when starting new lines. Some slicers include an option to end extrusion early in each move, but this adds more complexity to the G-code and has to be retuned for different temperatures and materials.

Since the root cause is pressure, LIN_ADVANCE de-couples extrusion from the other axes to produce the correct pressure inside the nozzle, adapting to the printing speed. Once Linear Advance is properly tuned, bleeding edges and rough solid infill should be nearly eliminated.

As the unit of K has changed, you have to redo the K calibration procedure. See next chapter for details. While old v1 K values for PLA might be between 30-130, you can now expect K to be around 0.1-2.0.

LIN_ADVANCE can reduce your print acceleration

In v1, if K was set to a high value which couldn’t be handled by your printer, then the printer was losing steps and/or using all of it’s processing power to execute extruder steps. In v1.5, this is handled much smarter. LIN_ADVANCE will now check if it can execute the advance steps as needed. If the needed extruder speed exceeds the extruder jerk limit, it will reduce the print acceleration for the line printed to a value which keeps the extruder speed within the limit.

While you will most likely not run into this on direct drive printers with filaments like PLA, it will happen most likely on bowden printers as they need higher K values and therefore faster speed adaptions. If this happens to an amount you don’t want to accept, you have the following options:

A note on bowden printers vs. LIN_ADVANCE

A quite common note during development of LIN_ADVANCE was that bowden systems (and especially delta printers) are meant to be faster due to the lower moving mass. So lowering the print acceleration as described above would be an inadequate solution. On the other hand, bowden systems need a pressure advance feature the most as they usually have the most problems with speed changes.

Well, LIN_ADVANCE was developed because I (Sebastianv650) wasn’t satisfied by the print quality I got out of my direct drive printer. While it’s a possible point of view to say that lowering acceleration on a bowden printer (which is meant to be fast) is a bad thing, I see it differently: if you would be satisfied with the print quality your bowden setup gives you, you wouldn’t be reading about a way to do pressure corrections, isn’t it? So maybe in this case the highest possible top speed is quite useless.. Bowdens are an option to keep moving mass low and therefore allowing higher movement speeds, but don’t expect them to give the same precise filament laydown ability than a direct drive one. It’s like painting a picture: try to paint with a 1m long brush, grabing the rear end of the handle which is made from rubber. Even if you try to compensate for the wobbly brush tip (which is basically what LIN_ADVANCE does), it will never be as good as using a usual brush. On the other hand, if you only need to have a part printed fast without special needs in terms of quality, there is no reason to enable LIN_ADVANCE at all. For those prints, you can just set K to 0.

Marlin documentation provides a K-Factor Calibration Pattern generator. This script will generate a G-code file that supports determining a proper K-Factor value. The generated G-code will print a test pattern as shown in the following illustration: 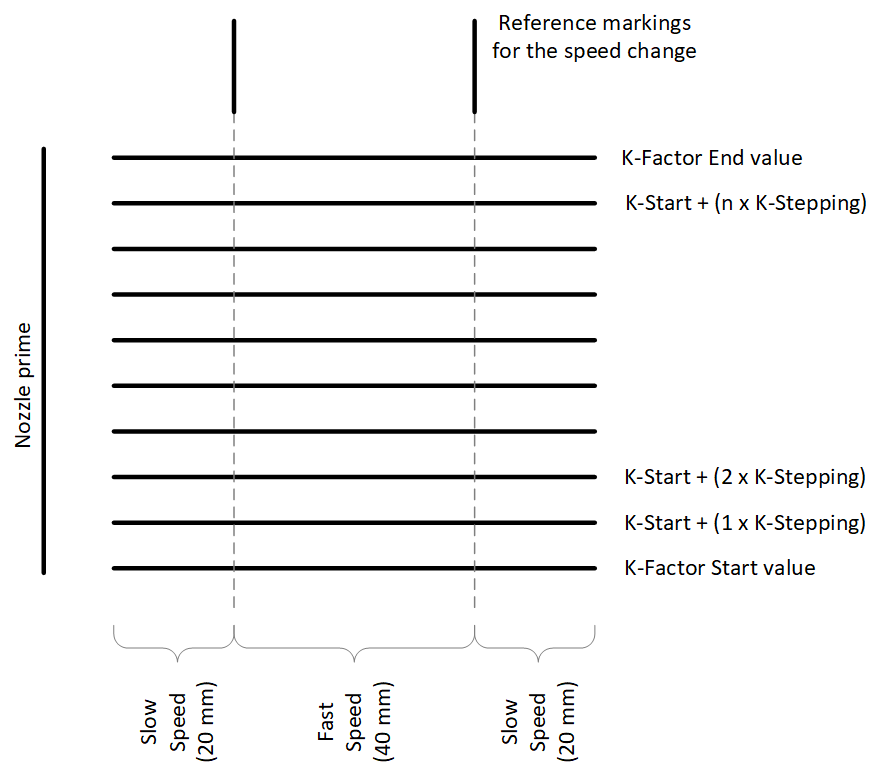 For each new line the K-Factor will be increased by the K-Factor Stepping value, up to the provided End Value for K.

Repeat the calibration, if any of the above parameters change. 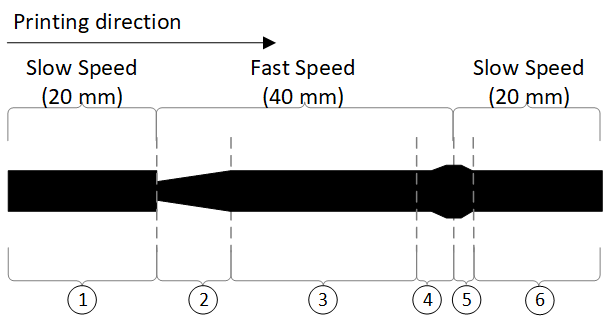 A too high K-Factor essentially reverses the above picture. The extruded amount will overshoot at the start of an acceleration and starve in the deceleration phase.

The test line, which has a fluid and barely visible or even invisible transition between the different speed phases represents the best matching K-Factor.

Setting the K-Factor for production

The following considerations are no longer a problem with LIN_ADVANCE version 1.5

Saving the K-Factor in the Firmware

If only one filament material is used, the best way is to set the K-Factor inside Configuration_adv.h and reflash the firmware:

Adding the K-Factor to the G-code Start Script

G-code Start Scripts are supported by various slicers. The big advantage of setting the K-Factor via this methods is that it can easily be modified, e.g. when switching to a different material. The K-Factor is defined by adding the command M900 Kxx to the end of the start script, where xx is the value determined with the above test pattern.

The following chapter briefly describes where to find the relevant setting in popular slicers.

With the G-code Start Script method, the feature still needs to be activated in the firmware as described in Saving the K-Factor in the Firmware. It is recommended to set #define LIN_ADVANCE_K to 0, which effectively disables the hard-coded firmware value. In this case only the K-Factor set via the start script is used.

The shown G-code Start Scripts are individual to each printer and personal taste. This is only intended to demonstrate where the K-Factor setting can be applied. 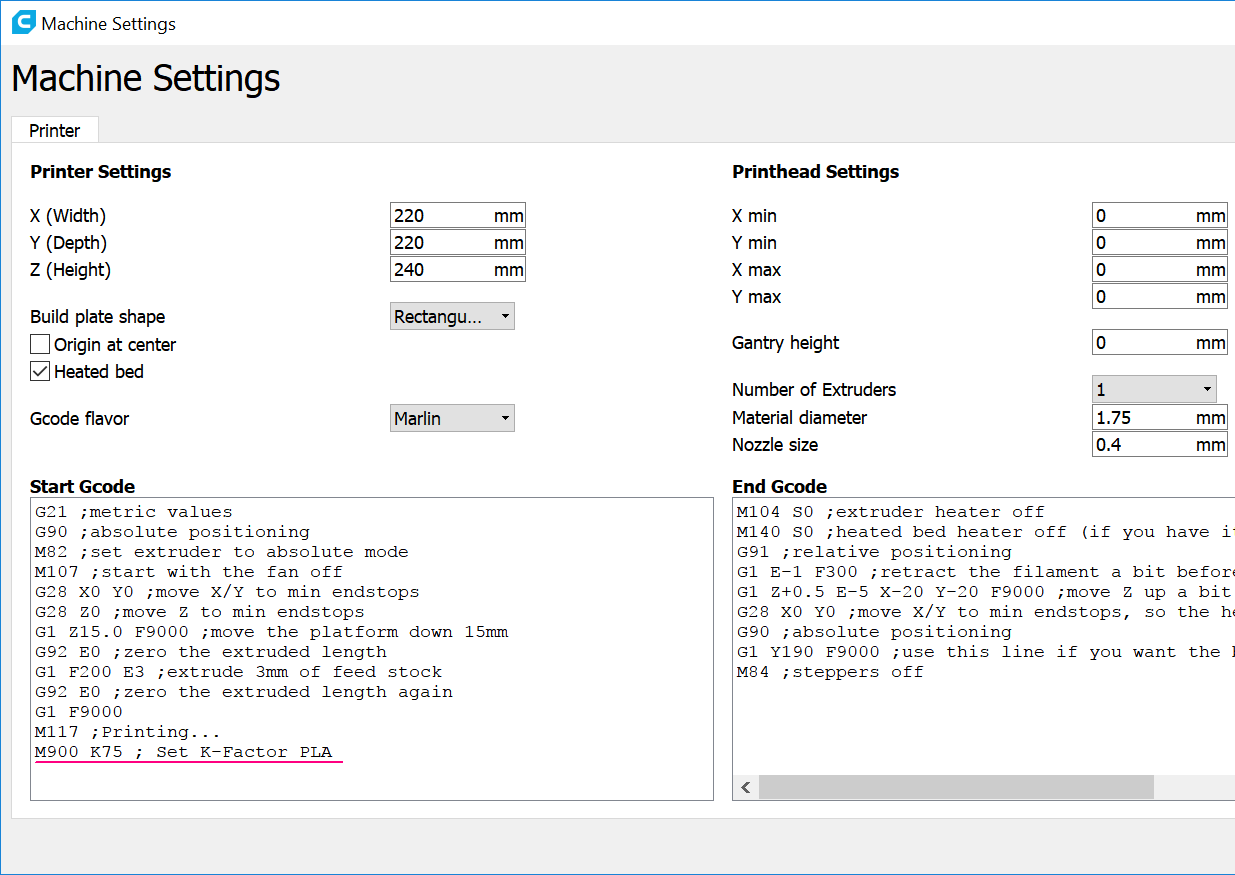 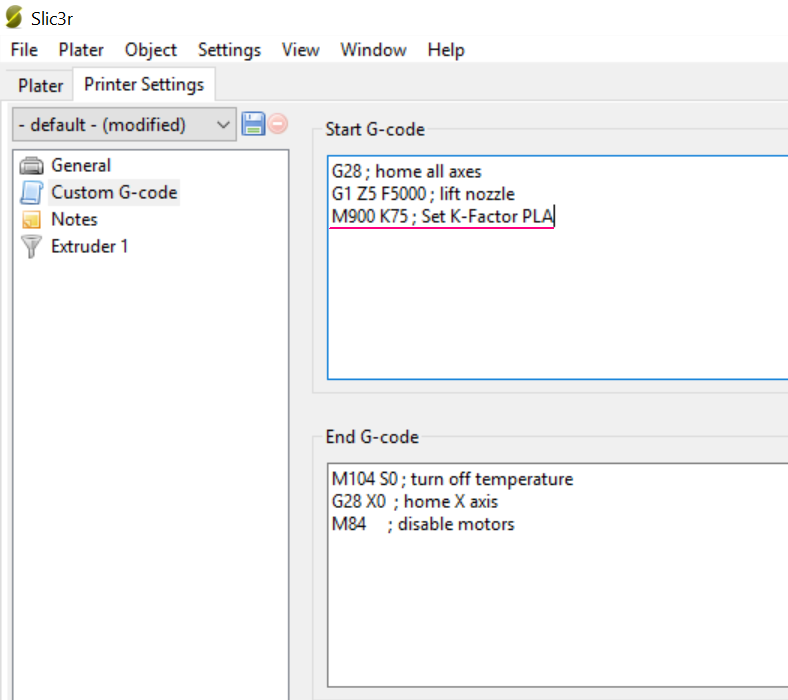 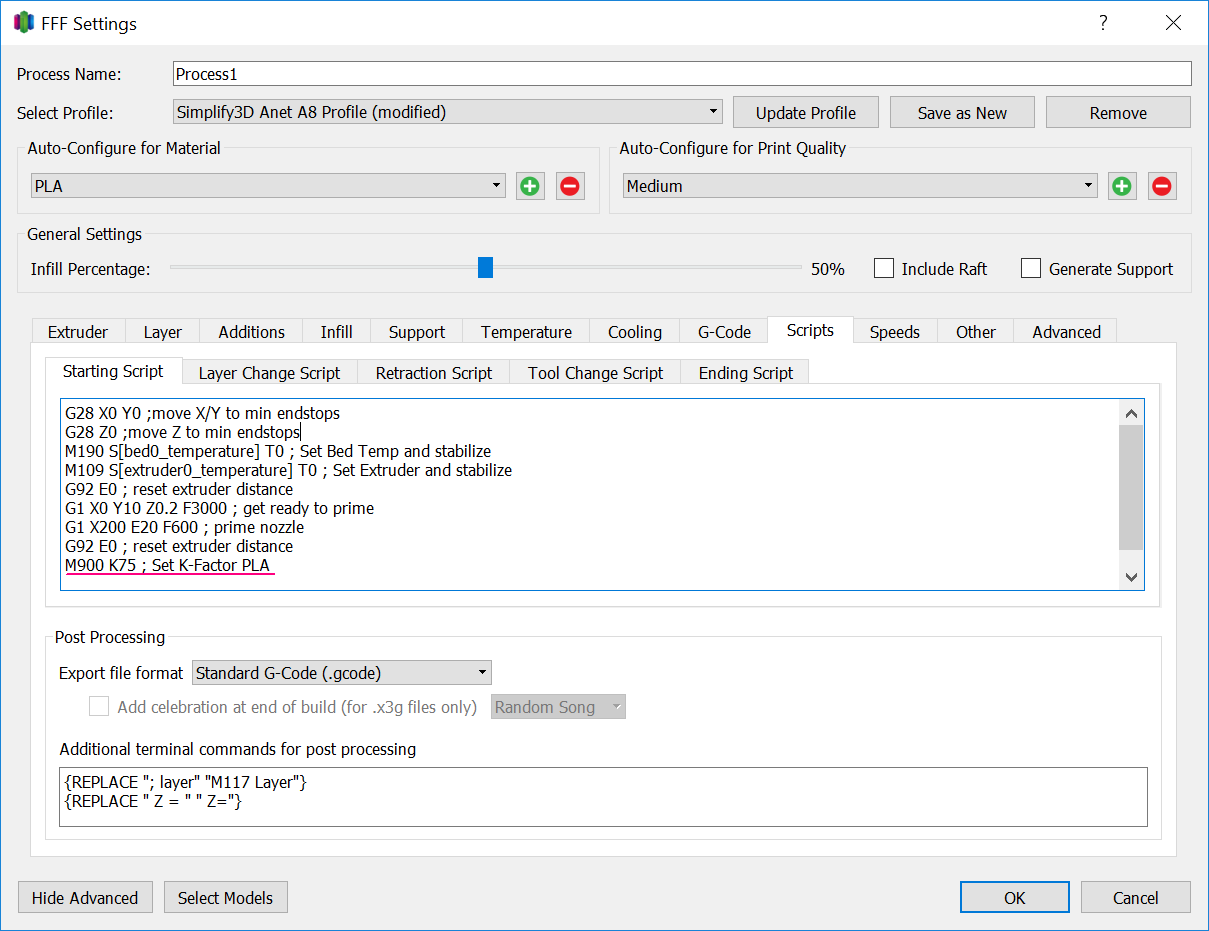 For a single, fast printed line, this results in under-extrusion at the line’s starting point (the filament gets compressed, but the pressure isn’t high enough) and over-extrusion with a blob at the end of the line (the filament is still compressed when the E motor stops, resulting in oozing).

For a complete print, this leads to bleeding edges at corners (corners are stop/end points of lines) and in extreme cases even gaps between perimeters due to under-extrusion at their starting points.

Version 1.5 handles the pressure correction in a slightly different way to reach the following goals:

When this block is executed by the stepper ISR, the extruder is set to a frequency which represents the calculated speed offset. The advance step is executed together with normal e steps. During the block runtime, the pressure will be advanced until the precalculated needed extra step amount is reached or the deceleration is started. During deceleration we reduce the advance step amount until we reach the amount for final speed or the block comes to an end. This checks are necessary as Marlin uses an approximation for acceleration calculation as mentioned above. Therefore, for example, we might not reach the final pressure at end of move perfectly but that’s not important as this error will not cumulate.

The next update might include improved handling of variable width moves. On variable width path it’s possible that we need to deplete pressure during acceleration, for example when the next line is much narrower than the previous one. Therefore LIN_ADVANCE would need to check for the actual extruder direction needed. Another case to be considered is the gap fill to the tip of a triangle: in this case Marlin will move on with a constant speed, but the extruder speed and therefore needed pressure gets smaller and smaller when we approach the tip of the triangle. We should adapt nozzle pressure with max. possible speed (extruder jerk speed) then. As gap fill is done at quite low speeds by most slicers, we have to decide if that extra load is worth the effect. On 32bit boards where calculation performance is most likely not a problem, it makes sense in any case.

The LIN_ADVANCE pressure control handles this free filament length as a spring, where K is a spring constant. When the nozzle starts to print a line, it takes the extrusion speed as a reference. Additional to the needed extrusion length for a line segment, which is defined by the slicer, it calculates the needed extra compression of the filament to reach the needed nozzle pressure so that the extrusion length defined by the slicer is really extruded. This is done in every loop of the stepper ISR.

The basic formula (advance_steps = delta_extrusion_speed * K) is the same as in the famous JKN pressure control, but with one important difference: JKN calculates the sum of all required advance extruder steps inside the planner loop and distributes them equally over every acceleration and deceleration stepper ISR loop. This leads to the wrong distribution of advance steps, resulting in an imperfect print result. LIN_ADVANCE calculates the extra steps on the fly in every stepper ISR loop, therefore applying the required steps precisely where needed.

For further details and graphs have a look into this presentation, slides 7-9.

In Marlin, all the work is done in the stepper.* and planner.* files. In the planner loop, LIN_ADVANCE checks whether a move needs pressure control. This applies only to print moves, not to travel moves and extruder-only moves (like retract and prime).

In the Stepper::isr method, LIN_ADVANCE calculates the number of extra steps needed to reach the required nozzle pressure. To avoid missing steps, it doesn’t execute them all at once, but distributes them over future calls to the interrupt service routine.

In v1.0 there is no check if the extruder acceleration, speed or jerk will exceed the limits set inside Configuration.h!